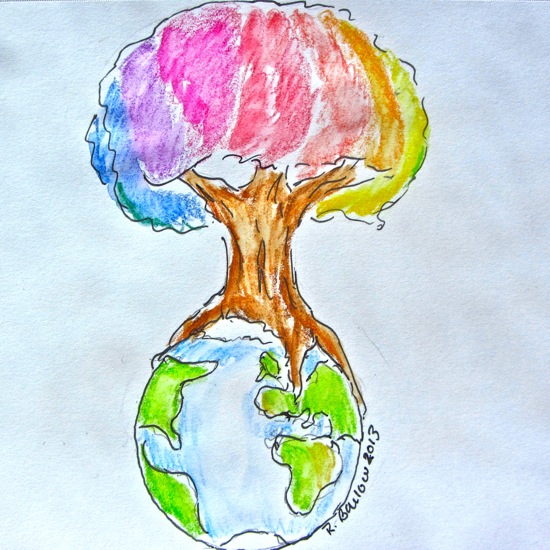 My younger son dances.  He sings.  He has a crate full of costumes – including a rainbow wig, several superhero outfits and a tutu – and a puppet theatre complete with curtains sewn by his grandmother.  He loves dressing up and taking on all sorts of personae.  He is the sum of his arts – joy in a skinny six-year-old package.

We make him leave the costumes at home (on school days anyway), but he brings his joy everywhere he goes.  He dances when he walks.  He falls in love with people at the drop of hat and is still at the age where he wants to marry everyone with whom he falls in love.

Most of the time his antics and his expressions of love – for his parents, his brother, the waitresses at Bob’s –  produce smiles from people around us.  It’s hard not to smile at someone who’s compulsively happy.  But every once in a while I’ll catch another adult watching his gaiety, and I can see a question forming behind the gaze.

I know the look and the question.  The look is judgement warring with joy.  The question is the wondering if the gaiety is evidence that our dancing, affectionate child is gay.  I don’t know.  I also don’t care.

I have seen and heard this story since I was in high school.  Several of my closest friends came out to our circle of friends before and after graduation.  Some came to the realization that they were gay very early in life.  Some had supportive parents.  Others lived in the shadow of projection (once with a violent result) because certain mannerisms or affinities were proof to others that they were gay long before they had considered the question themselves.

I would like to say that I was always mature and supportive.  With my male friends I remembered it made no difference.  With my best friend, I am sorry to say, I was less mature, mainly because she was suddenly dating and someone else was monopolizing her time.  At the time I wasn’t adult enough to remember I had done the exact same thing to her a year earlier.  The one thing I do remember, however, is that who my friends dated didn’t change how I saw them because they were still the same loving people who had accepted me for all my flaws as we went through the high school gauntlet together.

Today, as I’m watching the news, waiting to see how the Supreme Court is going to rule on marriage equality in California, I’m thinking about our journeys.  Some of my friends are still single.  Some have had commitment ceremonies – two couples the same year the Big Guy and I were married – and are still happily married themselves.  Our journeys have been different, but the parallels are still there.

We all wanted to fulfill our potentials.  We all wanted to love and be loved.  And we each wanted to be part of a family of our choosing.  It’s the same thing I want for both my kids.  But, most of all, I want them to have the same chance at happiness that I have had – regardless of the person they find to love.  So today, to me, this issue isn’t about politics.  It’s about my family.

One thought on “About Family”