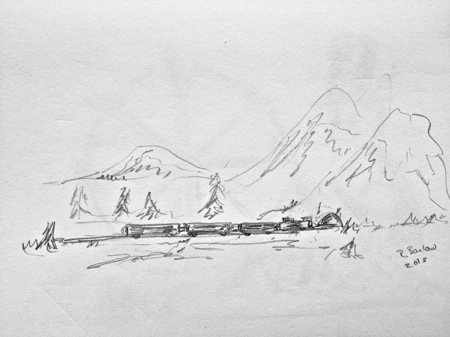 “We are now arriving in Rugby.  Rugby, North Dakota,” announced the conductor over the loudspeaker.  “For those of you who don’t already know, Rugby is the geographical center of North America.”  My two adult dinner companions and I looked at each other and smiled as the youngest of our party, six-year-old Thing2, absorbed the information.  It was the first time he had been silent since we had been seated with the Boy Scout troop leader and den mother.

The train may not have reached the geographical center of North America at its appointed hour, but the dining car staff was a model of down-to-the-minute efficiency.  Feeding 400 people in two hours required military precision and, as in our case, sometimes seating strangers together to ensure every booth was used to its fullest potential.

I had seen the Boy Scout troop board the train earlier in the day.  We had just reached the border of North Dakota when the uniformed flotilla of teenagers marched past us and then forgotten about them – a tribute to their chaperones’ ability to keep a dozen boys in line for hours on end – until the seating hostess put me and Thing2 together with their leaders.

Twelve years of living in a very small town has not undone my urban-cultivated and media-nurtured policy  of never talking to strangers.  However, for Thing2′ – born and bred in the country – strangers don’t exist.  As soon as we sat down he began chattering with our companions, asking about their badges and where they were going.

Sociability had been his hallmark for the past two days of our cross country train trip, and it kept him happily busy as he played with other children and introduced himself to friendly passengers in the observation car.  He showed neighboring passengers the pictures he was taking and cooed at babies.  He chatted with a friendly Amish woman about her dress (which he found beautiful).   And, as he got to know people from all walks of life, so did I.

Now, as we sat with our companions from the midwest, I thought of the pundits and pollsters who love to claim that Americans are completely at odds with each other – divided by region and class.  Listening to the troop leader talk about changes in North Dakota topography and things that were high in the minds of his neighbors, I was reminded that there were probably more shared values on that train than insurmountable, opposing ideologies.

We may have had different boarding points and destinations, but we were on the same journey.