We’ve had a few weeks of frigid temperatures and, after a few years of almost no snow – a return to a normal Vermont winter. This morning greeted me with perfect pink skies that can only come from the promise of a perfect sunny day. Even though I should know better, I couldn’t help thinking it’s almost spring, and as I navigated the mud pit that is our road, I starting humming something from ‘Seven Brides for Seven Brothers’. Pretty sappy, right?

It gets sappier. I’d gotten up early, escaping to our favorite diner for uninterrupted writing before the Big Guy and Thing1 and Thing2 woke up. The guys met me for breakfast a few hours later. Thing1 and Thing2 argued over who’s turn it was to sit with Mom, and, still euphoric from hours of typing, I basked in the glow of being with my guys. But it was going to get even sappier.

The Big Guy took the little guys to find a part for vacuum, and I headed back towards our neck of the woods in my car. On my way back, I noticed a few pickup trucks parked up on a hill. There was a group of men – some young, some old – congregated around a blue cistern next to a tree. Still feeling sappy, I thought didn’t notice the blue tube connecting the tank to the tree and thought, instead, how nice it was to see teenagers not too embarrassed to spend time with their fathers.

It wasn’t until I turned onto the last paved road on the way to our house that I had the sappiest moment of the day. Then, there he was. An older man standing in the bed of his pickup sorting a pile of tin buckets with tent shaped lids on them. I drove on and noticed he had already driven in the taps for at least a dozen trees.

I turned onto our road feeling extremely sappy and sentimental (and suddenly craving something maple). Even the mud didn’t bother me on my way back up our hill because even though there’s still a good eight inches of snow in our yard today and single digits forecast for a few nights next week, I know spring is here. I saw it on the way home from the Diner, clear as day.

This blog was born during a writing workshop which was originally to focus on different aspects of rural life. When I first came to the workshop, I was working on two pieces. One was a story about a potluck dinner (currently in a drawer but still staying out of the circular file), and the other was an idea for a story based on the life and marriage of Alice Little Fox, the girl in the picture above.
Alice Little Fox, a Mohawk, was the Big Guy's great-grandmother. She grew up in Wilmington, Vermont and eventually married Charles. He had a business in the town, and eventually they began raising Morgan horses together.
Alice's genealogy has always interested me, but not as much as the story of how she and the Big Guy's grandfather found each other. Interracial marriages did happen in the 1880s, but they were hardly common. The ancestry charts can tell you when and where they married, they leave out the most important story. Town records and headstones never reveal how two people from such different worlds built a bridge to each other and then a life together.
I'll admit to loving a good romance. I love the story of how my grandfather, still pulling himself up by his bootstraps, won my grandmother's heart (to the initial chagrin of her patrician parents). I love the story of an uncle who refused to let culture and an ocean prevent a marriage that's lasted over 50 years. But these aren't just romances. To me, every star-crossed union is a story, not only of how we came to be what we are as a family, but as a part of the culture we live in. 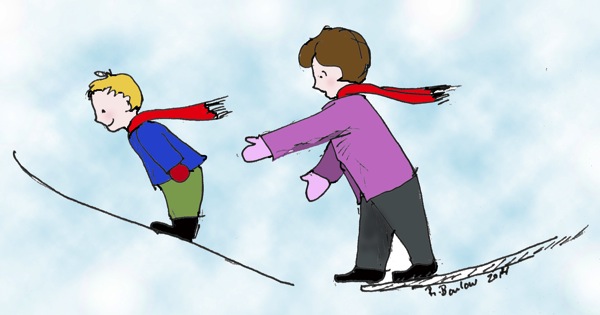 Last Sunday we took a much-needed family stay-cation to Brattleboro for a ski jump competition. We chose the destination because it’s been a stopping point for many Olympians, and, in the forties, for the Big Guy’s dad.

The temperature was brisk, and the sun was out. Food vendors and tailgaiters created delicious grilled odors that bouyed the four of us on our climb up the 150+ snowy steps that lined the jump hill.

Twenty feet of snow-covered hillside and path separated the top of the stairs from the wall that bordered the jump area. We staked out a spot just below the jump-off just as the first round of jumpers whooshed past us.

Seven-year-old Thing2 watched a few jumpers and then, his awe subsiding, focused on the consistency of the snow and it’s suitability for sliding and ammunition.

The first round ended, and he began begging for permission to slide down the massive hill next to the steps. Noting the abundant opportunities the hill afforded for an impromptu ambulance ride, I naturally said, ‘No’. Thing2 pouted, but kept his silence.

The loudspeaker announced a break in the action, and we decided to move to a lower part of the hill for a different view of the action. The Big Guy and I began navigating down the hill towards the stairs. Half-way down, I turned around to offer a hand to Thing2. Still standing at the wall, he grinned at me.

I hesitated for a minute and scanned his intended course for any objet d’injury.  Noting the incline leveled enough near the bottom for him to stop himself, gave my permission. Thing2 sat on his snowpant-covered butt and slid.

“You are a true Vermonter,” I told him as he coasted to a stop at my feet.  He is.

Despite the Big Guy’s deep roots in Vermont (from his father back to a time before “Vermont” existed) and Thing1’s maple syrup-steeped childhood, Thing2 is the only “real” Vermonter among us (I’m a recovering nomad). Local tradition confers the label only on those born in-state. The smile on his face as he sat in the snow, however, proved his status better than any birth certificate.

The path had been packed down, and Thing2 decided it was another slower sliding opportunity. I inched along behind him, keenly aware of the aging tread on my boot.

Finally, the eternal adventurer in me decided that since we were in Vermont, I should do as my native-Vermonter had just done. The slippery path was much more easily negotiated on my butt. The path from nomad to settled Vermonter is one Thing2 will be showing me how to navigate for some time.

We live well away from the madding crowd – such as it exists in rural Vermont (no, it’s not redundant). While we try to be as energy and resource independent as possible, the plot where our slice of life plays out is definitely a homestead – not a farm.
During summer months, we grow a fair amount of food, but my garden is as much about pleasure as it is necessity. We’ve had chickens for eggs, but also for company in the garden. When the fox raided our coop, we were sad but not scared – we knew there were fresh brown eggs for sale in the cooler at the end of our neighor’s driveway. We’ve made our own maple syrup, but most of the time we buy it from friends who are trying to build a working family farm.

Most days we’re so wrapped up in middle-class mundaneity that the solar panels and hot water on the roof and the amish wood cookstove that heat and power our life seem completely mainstream.

And then it snows. And snows. And snows. And we load a few more logs next to the woodstove and think how lovely it all looks. And, as much as I once romanticized the idea of being completely self-sufficient ,I’m glad we’ve picked the battle that lets us wait out the storms we’ve seen this winter without worry.

It is work – I hang every scrap of laundry and we monitor every watt we use – but it’s also a luxury, and we’re grateful for it each time the snow begins to fly. 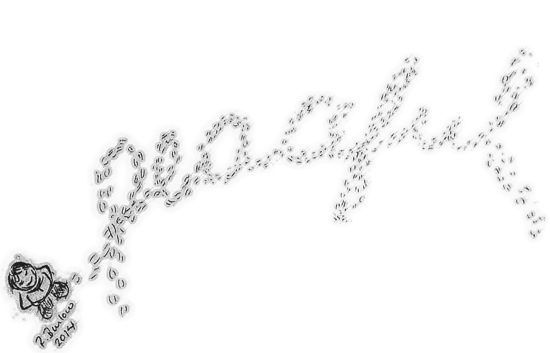 A few mornings ago my running path was buried under 18″ of new powder, so I broke out the snowshoes I keep in my trunk during winter. I headed to the park, equipped – as usual – with my ID (in case there’s a rash of muggings in rural Vermont) and my phone.

Running days I use the phone for music and tracking time and distance. Today, however, I’d left my earbuds at home, taking the phone with the sole intention of taking pictures, should the mood hit me.

And it did hit me.

As I trudged from the car across the snowy golf course, the sound of traffic diminshed, and only the roar of the nearby Battenkill serenaded my walk. My legs were soon on fire, but the exhaution became like a drug. I giggled and pushed on, and before I knew it, I’d stomped the word “peace” in the snow in letters big enough to be seen from a plane.

It was the most creative thing I’d done in a week. It was also, with the exception of the daily “don’t-forget-your-lunch” and “how-was your-day-honey” utterances, the only personal encounter I’d had with another human being – however brief it would be when that theoretical plane passed over – all week. I interact with dozens of customers and my corworkers all day in our company’s online chat rooms. I may ‘like’ a status or two on Facebook, but even when I run at a community park, my primary interaction with humanity is through the intermediary of my phone or some other digital device.

The other morning, completely alone in the park, surrounded by snowy mountains and disconnected from digitas, stomping out my piece wasn’t about politics. It was the peace of reconnecting with something real.