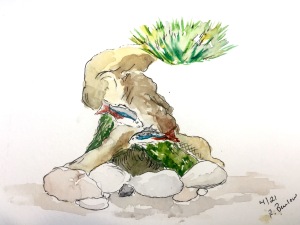 So Herman the Hermit was discovering his own beauty in the reflective surface of the aquarium, Oscar the Guppy was hiding among the purple plant leaves (apparently nursing some slight from the minions), and yours truly had only enough time for one 3-minute timed drawing.

Normally I don’t ask the minions to pose because they don’t like to hover long enough for a photo. Today, however, they had congregated under the bonsai to hold a secret (and stationary) meeting of the Guppy Poet Society.

Oscar had started the club and invited everyone else (Herman being a Hermit said he’d be happy to make guest contributions) so he felt it was perfectly fair to name it after Guppies. The Minions felt naming the club after guppies devalued their own contributions, and they came up with the idea for uniforms after all.

The water was soupy with drama, and, contrary to popular opinion, drama does not produce poetry.

Oscar and the Minions were still at odds when the 3 minute buzzer went off. The only thing they managed to agree on was to have flakes for breakfast.