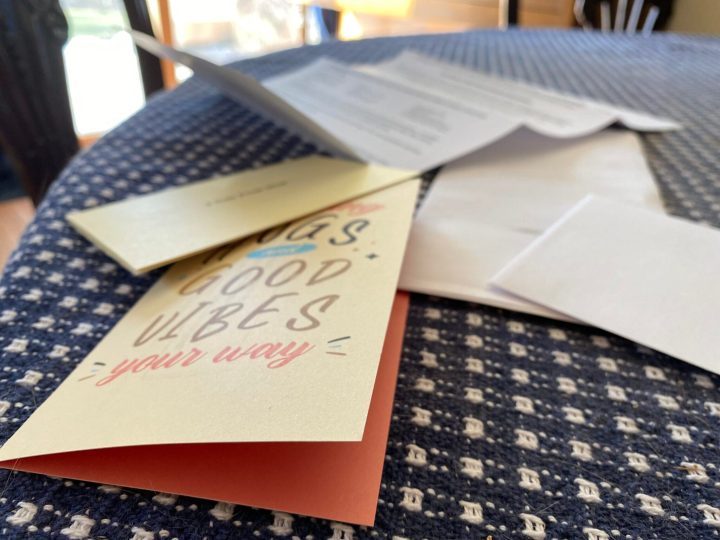 A few weeks before exams, Thing1’s school sends around a mailer that lets parents fill out a greeting card and select an assortment of “healthy” candies and snack foods to get through the rigors of studying and testing. Most of the letters from Thing1’s college are pleas for money for one reason or another, but this one always gives me the giggles.

The first mailer instantly had me mentally grumbling, “When I was your age we used to walk 50 miles in the snow without any care packages to take our exams”.  College these days seems a bit like summer camp but with amenities like all night cookie delivery and bubble tea joints on every corner (and, in the case of Massachusetts, actual joint joints on more than a few corners).

But this week there’s something I didn’t have when I was his age. In addition to the suppressed immunity I never had at any age, Thing1, who has faced his mortality more than once in the last two years, is hearing all the same news we are about the new Corona virus going around.

The new virus which has people suddenly washing their hands (who were these people who weren’t buying hand soap before last week?) and giving Vulcan “Live long and prosper” greetings instead of handshakes is the next thing we’re worrying about for him.

Thing1 takes things in stride, but his school has decided to keep dorms open over spring break to encourage people not to travel. His hospital has reported cases and is discouraging scheduling of new surgeries, including the next one he needs, in anticipation of an increased case load. I know that, despite his ability to take life’s little challenges one day at a time, this virus and all its potential implications are at least in the back of his mind.

Most of the time, COVID-19 news interests but doesn’t overly worry me. I’m mostly healthy. Thing2 is abundantly healthy, and the Big Guy is a rock.

The implications for Thing1, however, are on the top of my mind when I think too long about this new virus. So, even though I’m going to remind him that, back in the dark ages, we had to study for exams by candlelight and write our essays on bark using charcoal when we were his age, I’m sending him a a little care in the form of some hermetically sealed candy and snack food.

And there will be at least one giggle when I hit send.