Every morning when we bring out the checks, Katie follows us. She watches and whines, urging us to be careful as we move the growing babies from indoor enclosure to box to the chicken tractor outside. She trails the Big Guy from room to outdoors and hovers as he releases the checks into the tractor.

When the chicks are settled in their outdoor home, she’ll sniff on all four sides, inspect the sky to see if any predators are selling above, and then give a pointed look at Jim-Bob, as if to say, “Don’t mess with my chicks”.

most mornings she’ll lie down next to the coop, watching the chicks scratch and argue over who gets this would chip in that white fluffy flower. To be sure, Katie has her explorations in the woods. From the moment the chicks are in the tractor, however, until the moment we begin moving them back into the house, she lets us and them –and even the cats – know that she is there to protect and serve.  

She never growls or bares her teeth at anyone.    when she sees Princess Jane get too close to the coop, she will physically move herself between the chicks and arrow little gray huntress, but there are no snarls or parks. When it counts, she firm but always as loving with Princess Jane as she is with the chicks.   

No one will ever mistake Katie for a huntress or vicious guard dog, but as a vigilant and caring protector, she’s becoming quite good at keeping the peace.   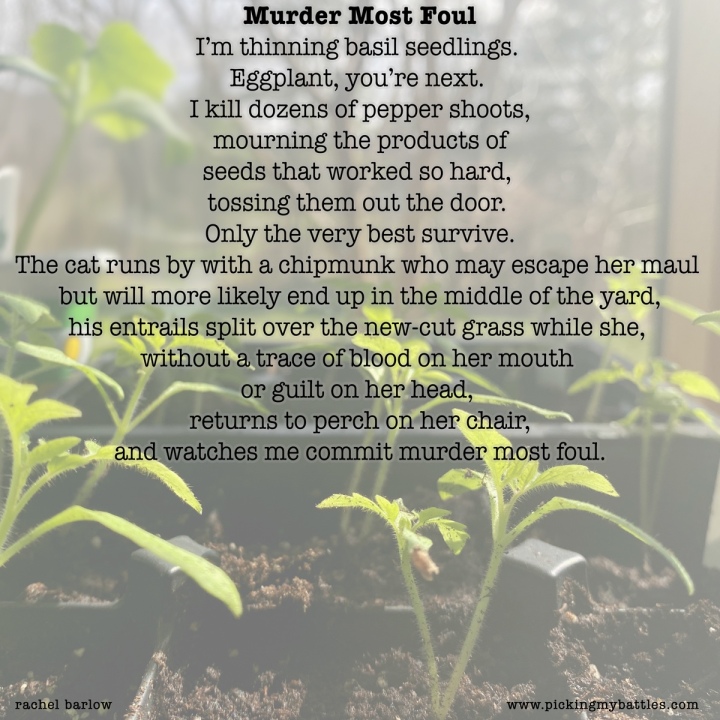 I’m thinning basil seedlings.
Eggplant, you’re next.
I’ve killed dozens of pepper shoots,
mourning the products of
seeds that worked so hard,
tossing them out the door.
Only the very best survive.
The cat runs by with a chipmunk who may escape her maul
but will more likely end up in the middle of the yard,
his entrails split over the new-cut grass while she,
without a trace of blood on her mouth
or guilt on her head,
returns to perch on her chair,
and watch me commit murder most foul.

Katie settles in from a comfortable distance to watch the chicks. She makes a practice of checking on them whenever they move from their indoor house to the outdoor home. She lolls in the grass as Jim tries and talk the chickens into squeezing through the holes in the wire.

The chicks love to visit with Jim, chirping that they’d be only too happy to show him their feathers up close if only they could get through. Visibly cursing the physics of chicken wire, Jim pretends to be distracted by a chipmunk under the car and left.

Jane watches for a while and then decides it’s time for the pro from Dover to put the fear of the Warrior Princess into the chicks. This is when, Katie, recognizing a true huntress, gets to her feet, shadowing her Royal Highness before she gets within 6 feet of the coop.

Karie takes a fair amount of teasing for being a bit of a wimp. It’s safe to say chicks are usually less afraid of the cats than the she is. Ultimately, though, she lives by one overriding philosophy of ”Don’t mess with my chicks.” 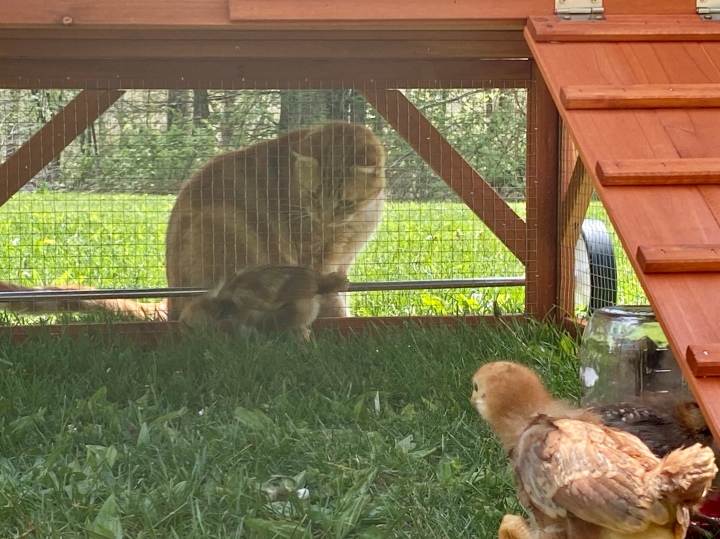 The weather experts kept pushing back the storms’ arrival time yesterday, so we decided to get the chicks out of their indoor enclosure and into the outdoor tractor for a little playtime.  We still get some cold nights, and they’ll go outside full-time when we hear more clucking than peeping. That can’t happen soon enough for all of us because the difference in environment between even a lovingly maintained indoor enclosure and fresh green grass is stark.

We’ve paired down our flock to a manageable seven. The Big Guy cleans the tank out every other day, and they have room to do gymnastics in there, but, in the tractor, they can actually fly a little. In the tank, they eat their medicated baby food — they’ll go to plain old cracked corn not too long from now. In the tractor but they’ve discovered the joy of chasing and chomping bugs. They get to play “who wants to tease the cat?” When they get tired, they find a sunny spot for a little meditation.

From past experience, we know all this roaming and bug eating makes delicious eggs with rich yolks. And, even though I don’t claim to be a chicken psychologist, from my lawnchair, the outdoor chickens, much like outdoor kids or cats or dogs, just seem happier.

When we first moved to southern Vermont, we noticed official-looking helicopters frequently flying over our town of 300 at certain times of the year. Wondering what, in the middle of nowhere, could be of interest to any officials, we asked around and learned that at least one property owner was farming 100% organic Mary Jane.

I get a little giggle every time my grow lights go on, wondering if, once upon a time, the glow from my window that’s keeping my tomatoes and squash happy might have caused a helicopter to hover a little longer. If they did now, they’d discover the two masters of the house chilling in the purple glow, dreaming of the organically grown chipmunks that will soon be trying to munch my squash plants.