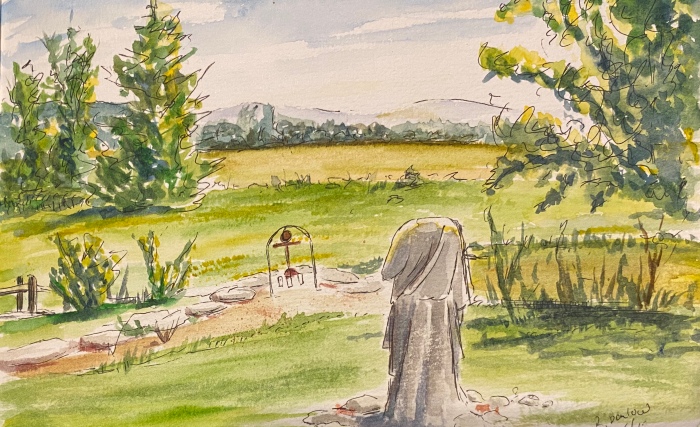 I love my job. I love doing the research to become more effective at my job teaching kids with disabilities how to access their gifts. It’s easy, however, to get absorbed by the work, Barely noticing when your feet turn to clay and your head turns to Jell-O (which is just as susceptible to gravity).

I painted the headless statue a few years ago at a friends’ farm during an open house they were hosting to celebrate rural and creative life. There were a dozen morbid reasons the robed figure could’ve lost his or her head, but, as I sat staring out at the mountains that rise up along the border between Vermont and New York, I felt a connection two it that generated a happier explanation for the decapitation.

Whenever I stare out of the mountains, I feel my spirit lifting into the clouds as I try to become one with nature. I never succeed at the merger, but the attempt always brings an unparalleled feeling of peace, followed by a burst of creativity. Whenever I see that statue, and one of my paintings or in real life, I like to think that the figure simply got lost in the clouds, and the feet of clay just got left behind.

I’m on April break this week, and I’ve spent most of it focusing on the things that keep my feet covered with clay. I’ve budgeted. I’ve done some windowshopping. I’ve done some research for my upcoming thesis. And I have bought into guilt for not getting in touch with creativity during this brief bit of downtime.

One of the things I do love about my job is that every day demands intense creativity. I know, however, if I don’t get my head back up in the clouds at least for a little bit this week, that well, while never running completely dry, will become tepid.

So today, instead of working on the feet of clay stuff like cleaning my office that looks less and less like a studio every day, I’m spending a little time giving into wanderlust with my watercolors in my bag. There are times when you really need to get your head back in the clouds.

I love to stop and ponder the headless statue whenever I go over to Bedlam Farm, the home of bestselling author John Katz and artist Maria Wulf.
This weekend I was there to participate in their semi-annual Open House, celebrating Rural Art and the creative spark that lives in all of us. I love the Open House because you can’t get up the driveway without running into an old friend and fellow art junkie, but this year there was something deeper to love, and it gave me a clue as to what might have happened to the pilgrim’s head.

As happens with every Open House, people from all walks of life and points of view came together to enjoy the art. Throughout the day I overheard people praising the work of others. Sitting under the apple tree on a wicker love-seat, I heard one visitor contemplating reviving her creative life as another enthusiastically encouraged her. We watched sheep herding and listened to kids relatively new to this country sharing their musical talents with a damp-eyes audience.

This weekend ended up being, for me, about nurturing the idea that the things we have in common–the things that bind us–are more beautiful and powerful and than those that divide us. There seemed to be a mass mutual recognition that our creative sparks are worth fanning and when we come together to encourage people’s gifts, we are all better.

That thought kind of carried my head into the clouds as I sat on that love-seat on Sunday, and I realize that’s probably what happened to the little pilgrim statue at Bedlam Farm too. I think he found himself at the altar of creativity (featuring a recycled art sculpture by Ed Gulley) and, keeping his feet on the ground, let his head get lost in the clouds as he chased his own creative spark.

It’s a worthy pursuit, and I think all of us who had a chance to sit near the altar this weekend went home full of sparks to nurture and share. 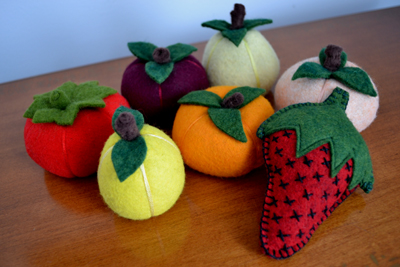 Our little corner of Vermont is still getting plenty of showers, so this month’s Common Thread Give-a-Way is a much needed punch of color.

Jane McMillan, is this months artist. She’s giving away a felted fruit pin cushion – and you get to choose from the collection above.  With the exception of the Strawberry cushion, all the cushions are filled with crushed walnut shells which keep pins sharp.  The Strawberry is stuffed with polyfil.

To win a fruit pincushion of your choice, just leave a comment at Jane’s blogLittle House Home Arts.

When you’ve been to Jane’s blog, take a few minutes to check out the rest of our artists: Bedlam Farm, Full Moon Fiber Art,and Pugs & Pics. 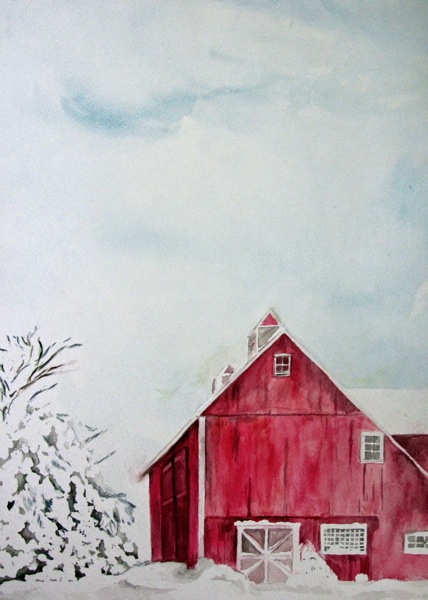 It’s the first Monday of March, so it’s time for the Common Thread Give-a-way.  Last month Maria gave away on of her drawings.

This month, in a nod to the winter that won’t quit, I’m giving away a print of a watercolor and mixed media drawing of nearby Ice Pond Barn.  The print is on 8×10 archival paper in a protective matt.

If you’d like to enter the drawing for ‘Ice Pond Barn’, leave a comment on my blog.  When you’ve left a comment, take a trip over to the other blogs in our group.

I’ll be picking the winner (using Random.org) and announcing who it is on Friday morning.