In honor of the first day above freezing 2015, I’m rolling out a new HOGA pose because, let’s face it, you really need it on a Wednesday:

2. Heat mug until chocolate is in liquid form.

3. Add marshmallows and cinnamon as desired.

4. Stand facing HOGA partner on opposite sides of mug. (If practicing pose alone, prepare to hug mug with arms or hands depending on size of mug).

5. Wrap body around mug.  If mug is too small to accommodate full body HOGA, prepare second mug and wrap arms around partner. 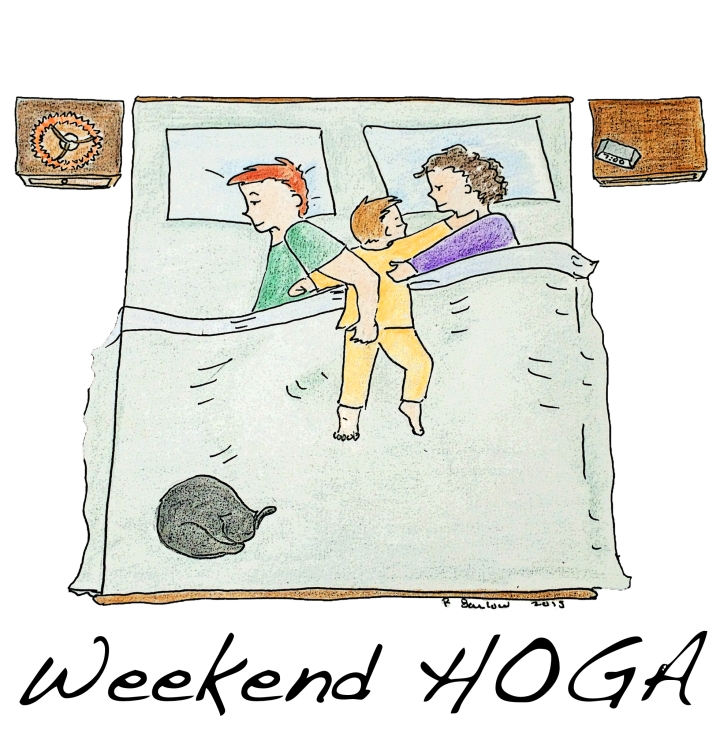 So, apparently, I’m not the only person who believes in Meditative Hug Therapy.  About 900 people on Facebook and Picking My Battles clicked and shared and, hopefully, practiced a little HOGA with a smile.

Thing2 was really excited – it’s his firm belief that any negative situation can be remedied, or at least tolerated with an eye-popping hug.  We have set some ground rules for him – the hug-ee must be a willing victim.. uh.. participant, unless it’s a family member, in which case there are no rules.

The only time that causes a conflict is when eight-year-old Thing2 is ready for Weekend HOGA.  The Big Guy likes to sleep late.  I like to sleep later than normal too.  But our idea of normal and Thing2’s (who believes sleeping past sun rise is too much sleep) are entirely different things.

So here at the Institute for Meditative Hug Therapy, we have come up with a routine that makes Weekend HOGA an uplifting experience for everyone (it gets everyone in this house out of bed):

The hugger stands at the foot of his or her parents bed.  If the time alarm clock on either side of the bed starts with a 6, it is recommended the hugger slides onto the bed quietly, wedging himself between said parents.  If it is later in the morning, the hugger can leap into hugging position, since parents may need to get up for a few minutes at this hour anyway.

Once in hugging position, it is recommended the hugger begin hugging one parent at a time, gently putting the elbow in the other parent’s face as he administers hug therapy to both parents.  Well-hugged parents should begin to respond to therapy after accidental bumps to their bladders.

The hugger should continue applying hug therapy with a thorough inspection of each parent’s face until at least one parent is ready to hug back or lift themselves out of bed and make breakfast already.

Related articles across the web

HOGA really is a thing.  Hugging Yoga has been around for a while, maybe decades, and it’s known to cure all kinds of well-known problems like too much cleaning, worrying about paychecks, and just being kinda down.  Possibly the best part of HOGA is that it takes just a few seconds to master and achieve the ultimate hugging status of being a HOGI.