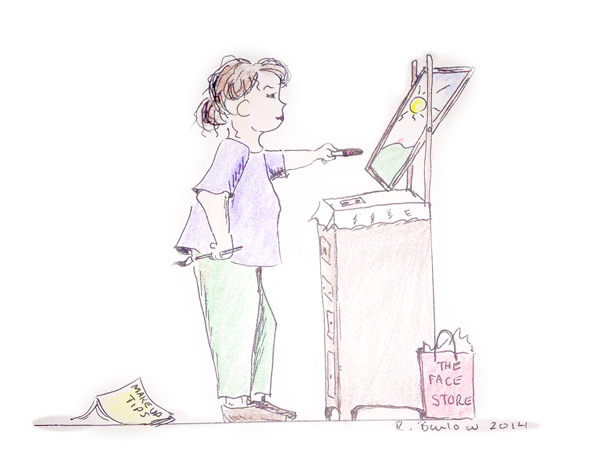 It looked like the perfect bag for my purposes, but I wasn’t sure if it would hold everything just right. So I marched the toiletries kit over to the makeup counter and began pulling out the paper stuffing and shoved in the sketchpad and journal I always carry in my purse.  The sales girl (she looked like she was barely out of high school) watched me with a bemused smile.

“I’m not shoplifting,” I said.

“Making sure it all fits?” She said and smiled wider. “I take a lot of makeup too.”

I scratched my head and nodded but didn’t say anything.  I wasn’t wearing any makeup, and my hair looked like I had just rolled out of bed (just so we’re clear, I was doing the messy look at least a decade before the style became fashionable – it just wasn’t intentional), but I suppose even at my frumpiest someone might generously have thought I needed a small suitcase to carry the spackle and putty knife I’d need to make myself presentable on vacation.

But how could I tell the perfectly coiffed and made-up sales lady that I had other less noble intentions for this bag and that the only paint in our house is destined for our walls?  How would someone so seemingly-effortlessly attractive understand the perspective of someone who had never been comfortable with her appearance?  She probably never knew the sting of having other people tell her they were uncomfortable with her appearance?

I wish I were kidding when I say a guy in high school told me once for about three years in a row that when I grew up my Native American stripper name should be ‘Dances for Dog Biscuits’ (and that was one of the kinder comments).  I wish I could say I was and am mature enough to have let the barbs roll off my back, but there were enough of them from enough people that they did sink in, and I eventually wondered if I had one of those faces that only a parent or a very near-sighted husband could stomach.

I spent a few years trying to improve things, but after spending more money than the pentagon on hair extensions, makeup, failed fashion ventures, and all the other things that help a girl attract a guy with low standards, I threw in the trowel and decided to wait for the afore-mentioned near-sighted husband in the form of the Big Guy.

Throwing in the towel is actually quite liberating. It allows you to focus on other priorities like losing weight for your health or – gasp – finishing your education so you can stay gainfully employed.  The Big Guy tells me what I need to hear, and when Thing-One came along, he changed my priorities.

Now with my own eyes going off the rails, I realize that my face doesn’t look nearly as asymmetrical, but it doesn’t distract from what I’ve learned makes life complete.  I’m still weight-obsessed so that Amtrak doesn’t charge me for a second seat on our trip, but it’s not so I can fit into the next size down.  The dress.. uh jean size doesn’t make me a better parent, it doesn’t improve my writing, and it doesn’t make drawing or painting anymore fulfilling.

I’m sure the neanderthals who tortured me in high school (and beyond) are still neanderthals and would say the same thing if they saw me on the street today.  I’ve gained weight over the years, and the improved hearing that comes with the extra poundage has enabled me to truly enjoy all sorts of comments by complete strangers about how little respect I (like all overweight people) have for myself.  I think they’re wrong.  I think the fact that I no longer let a quest to achieve someone else’s definition of beauty define my life is anything but a lack of self-respect.  It’s a just a different set of priorities.

So as the cosmetic lady offered me a compact case and a mystery bottle of beauty glop to test the size of my mini suitcase, I shook my head and grinned.

Actually, I’m using it for my art supplies,” I said.  “I’ll just pack my toothbrush and toothpaste in a Ziplock bag.”  Her smile faded a bit, and then she nodded, turning to help another customer who might still be saved from misplaced priorities.

1 thought on “Keeping Up Appearances”