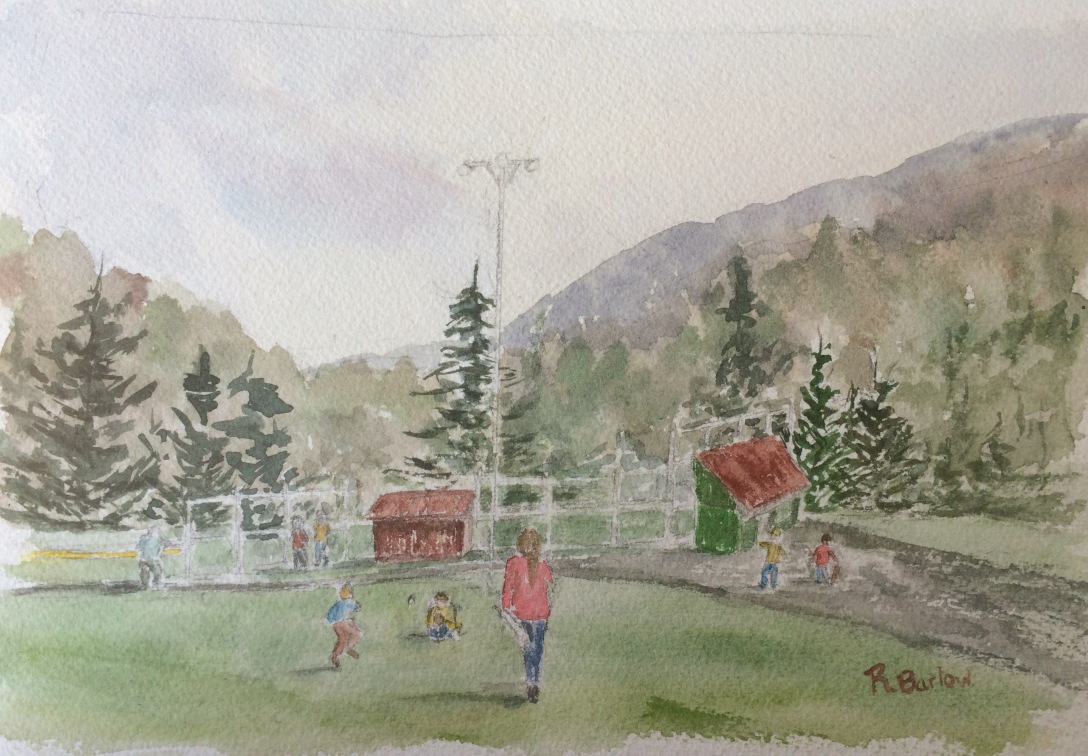 We got to the park just as the sun was moving behind the mountains on the west side of the park. T2’s ragtag team was already scampering around the field practicing pitches and catching. T1 stayed for a bit to yell encouragement and instructions at T1 and then went to meet friends at the nearby golf course.
For the next 45 freezing minutes, I painted the scene in front of me, listening as one of the parents – T1’s history teacher – caught us up on some of the happenings at the high school.

Arlington, Vermont is a picturesque town, but it is not an affluent one. Almost 2/3 of the kids in our school system are on free or reduced lunches at any time. Despite a lack of wealth, however, Arlington Schools consistently do well academically and socially, and the scene at the ballpark was a clue to its success.

I’ve known many of T1’s teachers for years. I’ve known most of the parents on T2’s team for years. We see each other at the park and at the country store. We trade gossip, we also offer support and help when it is needed.

It is 1,000,000 miles away from the large affluent high school I attended. Located in a suburb of a large, efficient, Midwestern city, it was easy to fall through the cracks almost unnoticed, as one of my friends did during my junior year and I almost did the following year.

I don’t worry about T1 or T2 slipping through the cracks. I know from experience that if someone at the school senses a problem, they’ll pick up the phone or pull me aside at the ballpark for a quick chat. Those simple acts of kindness cost nothing and mean everything.

Some authors have written powerfully about the decline and even the disappearance of small towns as our society has elevated productivity and profit to a cult that cannot extract enough financial value from the perceived inefficiencies of rural life.

Last night I was reminded again of those writers who, like me, still see that the value of the small communities is not found on a balance sheet. And, as I watched a carefree T1 disappear with his friends to another part of the park, I didn’t think about the things efficiency could bring us, I thought about how rich we already are.

2 thoughts on “On Balance”