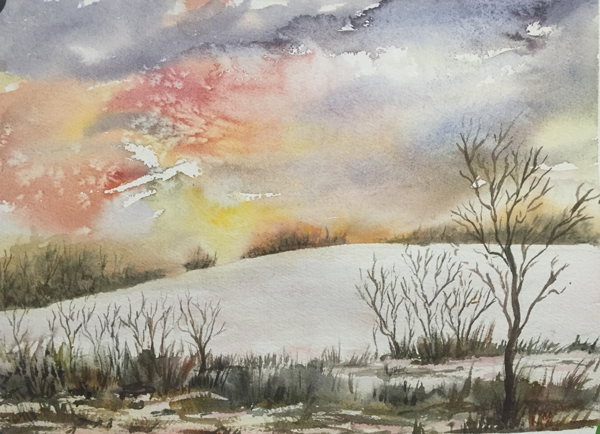 Gershwin and Copland were at the top of the playlist last night, and I was  in a New York State of mind, thinking about how these two children of immigrants fleeing persecution expanded our musical legacy with contributions that captured the optimism and possibilities of America.

I kicked off with Rhapsody in Blue to help my head try and find its way back to a vivid sunset we enjoyed a few nights ago as we drove through New York’s Capital Region.  T1 was driving, letting Mom focus on sinking sun behind the snowy, rolling hills, dotted with farms.  I marveled as I always do that we were driving through the same state that holds one of the biggest cities in the world.

I’ve lived in New England for over 20 years–the longest I’ve lived anywhere in my entire life.  My parents lived abroad a couple times when I was a kid and moved within the US. When I left home, I kept traveling and moving.

I love the New England, but despite the long residence, I never felt that it – or any place – was home. I’ve rarely been any place that I didn’t fall in love with for a time, but the ants in my pants never completely leave me alone. I’m always ready to try a new food or hear the music of another language — for a new adventure.

It’s one reason, that the place that most feels like home is New York state. Ten minutes from the house, it’s close enough for a get away to Saratoga or Albany. Between the Capital Region and nearby Adirondacks the state offers enough diverse activity to quench – for a little while – my wanderlust with an occasional day trip.  It turns something as mundane as a snowy sunset over an Appalachian foothill into a reminder of the world of possible adventures — from Manhattan to Niagra Falls — just over the state line.

Possibility is a powerful aphrodisiac.  Almost as heady as the adventure itself.