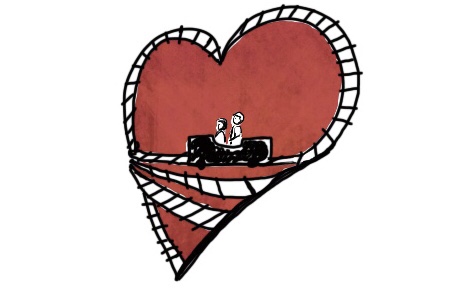 “Oh, I realized he was an alcoholic almost 30 years ago,” my friend told me in a moment of candor. I was gobsmacked. He, her husband, always seemed a personification control, but I also knew only the people in it know what goes on in a marriage.

I asked how his disease of addiction had affected their marriage, but I really wanted to ask, “How did you hold it together?”

“I had to just detach,” she answered without any hesitation. “I detached with love.”

I’ve thought about that phrase a lot recently.

As my friend explained and I later learned, detaching with love meant not allowing the addict’s behavior to govern her own actions or emotions.

My friend’s life had been chaotic before she began detaching with love. She explained that when he wasn’t drinking, their marriage was good. When he was drinking, he was manic and she was angry. Detaching meant finding an even path next to his.

Thing2’s illlness has been the proverbial emotional rollercoaster ride.. Just when we think we see the top of the hill, the bottom drops out with no clue where it will stop.

I generally hate rollercoasters. My stomach stays tense for days after. The current ride relaxes it’s grip on my heart for just long enough to let it relax before clenching again.

When Thing1’s symptoms start wrapping their tentacles around our hearts, it’s tempting to try to detach emotionally, but it’s also impossible. To detach means to experience the lows and lower lows of the disease through a filter, but it cannot occur without a cost.

Thing1 is not his disease, but it is part of him, and he is part of me. Anesthitizing my feelings to gain the illusion of calm, detaching enough to pretend the disease doesn’t cause emotional turmoil would require detaching part of my heart from him. That’s a price that I’m not willing to pay.