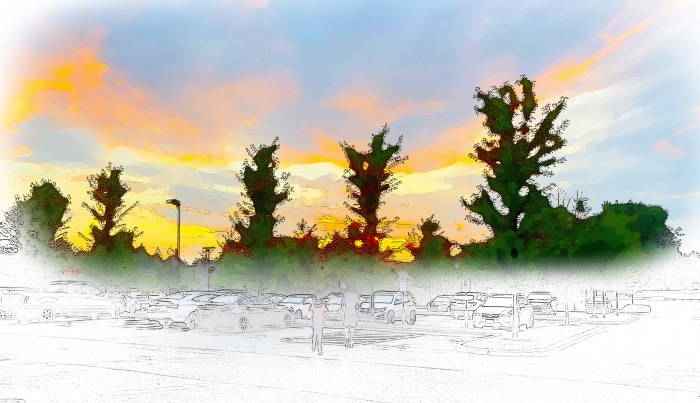 I was finishing up the day with my live chat tech-support customers when storm started rolling in. My office is at the back of the house and has no windows, only a sun tube we installed when we built the house to make sure that every room had natural light during the day and did not need to use electricity. My only warning of the approaching storm was sudden dropped connection as our satellite Internet lost signal.
I went out to living room to make sure the animals were in. Princess calamity Jane, our mighty grey huntress was by the window, meowing to go out. I ignored her plea and went to through the mudroom to the front door to call for Gentleman Jim, our orange tabby who thinks he’s tough, but is really just a big pussy cat (yes I went there).

I open the door and was blasted by the steamy hot air whipping around me. A few drops of rain had begun, and the clouds coming over the mountain were violent and purple. I didn’t see Jim and closed The door, turning the Tumblr lock to keep the wind from blowing it back open. Thing2 and I went to the living room window to watch the storm, uttering the odd “look at that” Or “there goes another tree” as the wind forced the trees surrounding the yard to bow to the ground and submission to the sky.

I went back to the door at one point to try to call for Jim. The wind was roaring, taking on familiar sound of an approaching freight train that, when I was growing up in Midwest, would have sent us scurrying for the basement. I could feel the air pressure change as I opened the door and called for Jim, wondering what I was doing risking our safety for a cat.

I could hear him yowling in fear, and turn my head toward the sound of the distorted meows. He had taken cover in the woodshed, but the rain was blowing in and, seemingly having forgotten his barn cat origins, he desperately wanted to be inside and dry. He heard me calling and looked in my direction.

“Come on, buddy,“ I called to him as if he were one of the boys. He hesitated as the rain began to pound harder and then made the four jumps from the shed to the door. We rode out the storm at the living room window, with me thinking how lucky we are to live in a house that is essentially a storm cellar.

The storm was almost as brief as it was intense. Thing1 still needed things for his very specific diet at the grocery store. It was late , but the boys and I headed back to the mundane and to Bennington, riding out the second and last storm of the evening in the supermarket parking lot.

The Big Guy has issued dinner for the last few months, a weight-loss strategy that’s been quite successful for him. The boys and I still needed/wanted to eat, however, so we stopped at a nearby restaurant on the way home.

It became another completely ordinary evening, the powerful storm almost forgotten. we ordered our drinks as the waitstaff brought a birthday cake to a nearby table. We argued about just how much caffeine Thing2 do would actually be allowed to drink. Another family sitting directly behind us, speaking Spanish, celebrated a birthday with a singing cake. It was deliciously ordinary.

We told the birthday lady Feliz Cumpleaños as we got up and walked out to parking lot.

The last of the storm clouds are moving out, and a brilliant sunset begun. It was as if mother nature was trying to tell us that this ordinary day, this day when we had the luxury of worrying about the safety of pets because we knew our family was safe, when we could experience the potentially very dangerous power of mother nature with awe and not fear and still be able to enjoy a typical grocery store visit and dinner out marked only by the two performances of a birthday song, had been a precious — and rare — gift.

I’m still trying to figure out the best way to pay it forward.