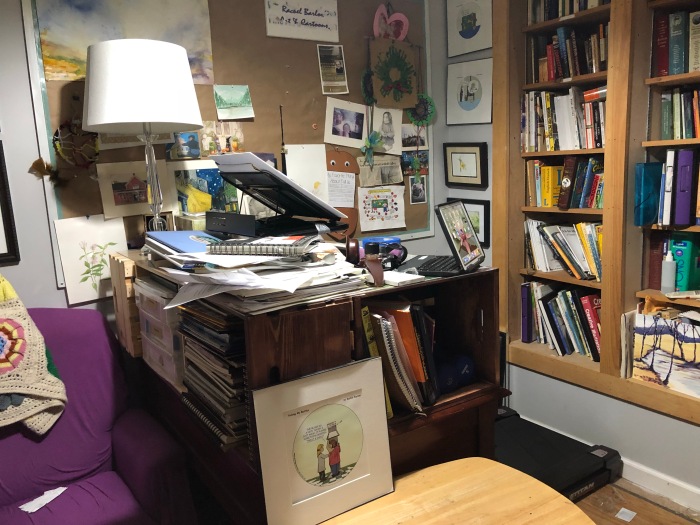 Back in February, knowing my eight hours a day on my ass work schedule combined with an hour of writing and watercolors–also on my ass — was a recipe for muscles so atrophied you could grind them into powder, I converted my desk into a standing desk. It wasn’t just a standing desk, it was a walking desk, and it was one of my least bad exercise plans ever.

Now I’m not gonna sit here and pretend that I’ve been diligently walking five and 6 miles a day. Nobody who knows me would believe that anyway. I am going to sit here and tell you that there have been weeks at a time where I have been walking 4 to 7 miles a day while working and writing. I’ve done some of my best writing while walking.

It shouldn’t be too much of a surprise. Most people tend to mull things over when they’re walking by themselves, and once you get the hang of typing normally while you walk very slowly, the two activities blend beautifully.

One thing walking is not great with, is painting. Now I’ve been known to paint and dance, I paint and stand all the time, but painting and walking takes way more coordination than I have. Even standing and painting at the standing desk is problematic, since paint and paint water tend to get flung or knocked over by furry studio mates. 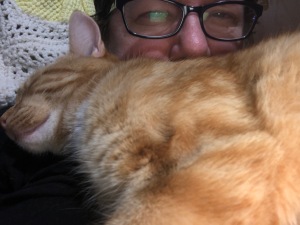 So this morning I got up a little bit early to do a little more rearranging of my studio/office. I’m turning on old desk that’s too small to paint on into a tabouret and putting an easel on it. I’m adding a shelf to make doing watercolors and oil possible at the same spot. There’ll be some excavating and even — gasp — cleaning. Sometimes, however, you have to do some pretty dirty things to be able to make room for the projects that really matter.

I hadn’t painted much since Thing1’s illness switched into overdrive. Depression and and insanely busy schedule highlighted by almost weekly four hour round trips to the hospital made me feel like I had to pick my creative battles, and for a while that battle has been writing, and it has been invaluable.

A friend’s prodding a few weeks ago, however, made me wonder why I hadn’t turned to my brushes during all the chaos. I didn’t have an answer. I didn’t really know at the time. Painting, ironically, is the perfect outlet for depression. Unlike writing a book, you can do it in short bursts and even have a finished product at the end of the evening.

A couple weeks ago I was driving back from the hospital with Thing1. He was too anemic to drive, but he was alert enough to point out summer scenery that we might’ve missed because the route is too familiar. One mountain scene caught my breath, and for the first time in months, I remembered why I paint.

Since my last show, I’ve been wondering if painting was a selfish act, much like I often worry bringing children into a world filled with uncertainty was purely selfish. Hundreds of artists have painted these mountains thousands of times. What could I possibly have to contribute to a body of work created by people infinitely more skilled? As T1 and I drove south along Vermont 7, however, as the road curved to Reveal the perfect combination of mountains and field and clouds, I knew that, despite T1’s precarious health situation, at that moment we were both feeling as strong as the mountain itself.

Later that night when we got home, I picked up brush the first time in a long time, hoping to recapture that feeling from the afternoon. I didn’t retreat to my studio; I sat on the couch next to the kids hoping my characteristic clumsiness wouldn’t result in oil paint on our new secondhand couch. I posted the pic when it was done, and I knew it wasn’t purely selfish. It might not contribute anything new or profound to that body of work that has already been created about these mountains, but all it had to do was make one person feel that moment of joy or even hope. 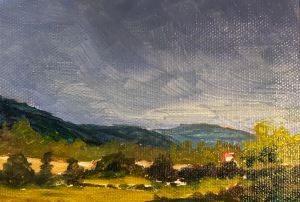 I’ve been painting on the couch every few nights since then (T2 likes me to be close still, and that won’t last forever), but getting the studio behind the kitchen reconfigured for writing and art is part of drawing very important line in the sand. It’s physically and mentally making room for art in my life because while writing helps make sense of the chaos, art is what gives me hope and ultimately strength to keep pushing through it. And that’s not entirely selfish.