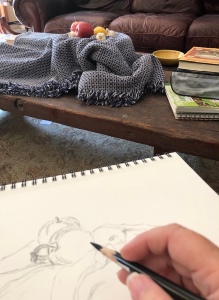 We were in the emergency room until late last night. I’ve been having some dizzy spell’s and shakiness we still can’t explain, so I almost thought about canceling today. but no one will ever accuse me of letting common sense interfere with good idea.

My visit to the Clarke Art museum a few weeks ago planted the seed of an idea of a weekly drawing group. I was inspired by the biographies and descriptions of the women featured in the exhibit. They had gone to Paris at the last half of the 19th century. Some went against their family’s wishes, others, primarily from Scandinavian countries, went to Paris for the culmination of their education. they worked within and against the salon system, often forming their own small salons, drawing encouragement and inspiration from each other. How could you not be inspired by that?

I think inspiration kills common sense, and some days that’s a good thing. I got the house presentable and readied a few snacks and a still life. I had thrown out an invitation to a small group of fellow artists, knowing Wednesday afternoon might be dicey for most people who don’t work weekends.

In the end I ended up making a few shaky sketches on my own. I’ll get there oils out in a little while – oil seems to be more forgiving of my unsteady hands.

The invitations to draw and encourage and be encouraged are still standing, and the list, hopefully, will grow. My seed of an idea still germinating.Today, Just by following through, I gave it a little more water.