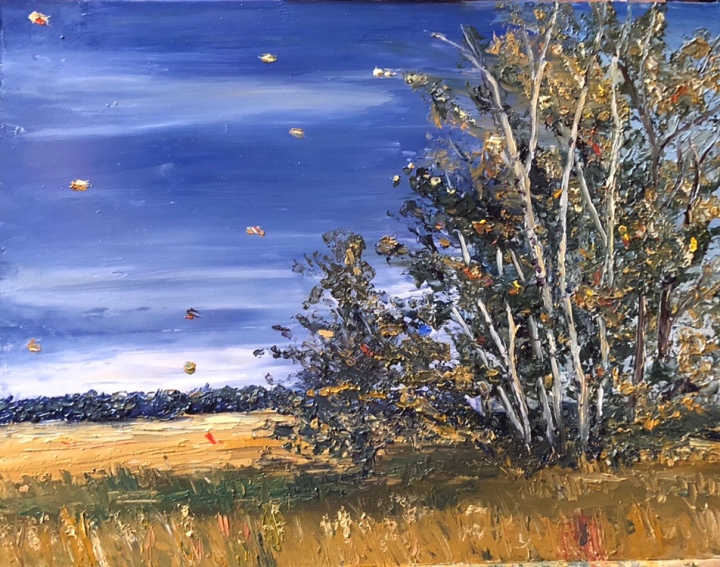 Last night after work I went back to Bedlam Farm to finish a painting I had started earlier. The crowd had left for the day, so I walked around to Maria’s studio to see if it was okay to set up the easel. Her studio was dark, and, since I had texted earlier to warn them an art stalker might be setting up shop for a bit by their pasture, I decided not to knock on the back door and disturb the family. I had just opened my pochade and tripod when I heard Maria coming from the other side of the house.

“I thought I saw something go by the window,” she laughed. “You can come in! Abrah and Susan are still here!”

“Oh, thanks,” I said. I had dinner plans with my two partners in crime later in the evening, but I also didn’t want to intrude. “I’m just finishing up the piece.”

She laughed again and we chatted about the open house. It had been a bit quieter than previous open houses, possibly due to the increased number of events in town and the wet weather. Maria mentioned that one of my partners had initially described this open house as ‘lackluster’ due to the crowd size.

“I thought it was cozy,” I said. From my point of view it had been. There had been other artists making art, poets reading their work, and Jon and Maria’s sheep herding and shearing demonstrations which are always fascinating. It was like an incredibly authentic and intimate country maker faire. But I said, “I couldn’t get in the school house studio to say goodbye earlier. Remember, it doesn’t take a huge crowd to enjoy and sell art, just the right one.” Maria laughed and went back into hang out with Abrah, Susan and Jon until it was time for three of us to leave for dinner in town.

Abrah , and now Susan, and I are the girls you knew in first grade who had to be seated on opposite sides of the room for anyone else to get work done. Fortunately, for the other restaurant patrons, the three of us were seated between other people in our party at the table for 8. Other members of our party were uproariously funny, but it wasn’t until the three of us were standing on the sidewalk outside the restaurant that the volume on the laughter was in danger of alerting the Cambridge police.

“You are such a brown-noser,” Abrah teased me. “Blowing sunshine up Maria’s skirt!”

“I was telling it like it was,” I shot back.

“You were blowing sunshine,” Susan chimed in.

“Okay, it was sunshiney truth, because that’s what good friend’s do,” I said, sounding a bit drunk from my three iced teas and an afternoon of being around joyfully creative people. “They blow sunshine.” We devolved into first grade giggles and other uproarious debates about partners and theories about the shape of the earth. We broke it up by nine (i’m finding when you’re almost 50, nine p.m. is the new two a.m.)before anyone tried to tell us to clear out.

As I drove home, though, I decided, I was blowing sunshine at Maria earlier, and that doesn’t mean it wasn’t real. It had been a blissful afternoon for everyone I had met. People from all walks of life had convened to talk about making things rather than tearing people or things down. Artists and poets found receptive audiences, and, if this year is like other years’ past, at least one person in that smaller but happy crowd became aware of their own creative spark.

This morning when I met my partners in crime for breakfast, we were still giggling about my new catch phrase, but even in the cold rainy light of day, we were all feeling a bit of sunshine from the weekend’s events. As I hugged Abrah goodbye, I told her, “I’m planning on blowing sunshine your way until you come back.”

It’s a silly mantra, but I’m a silly gal, and I think I’ll keep it.