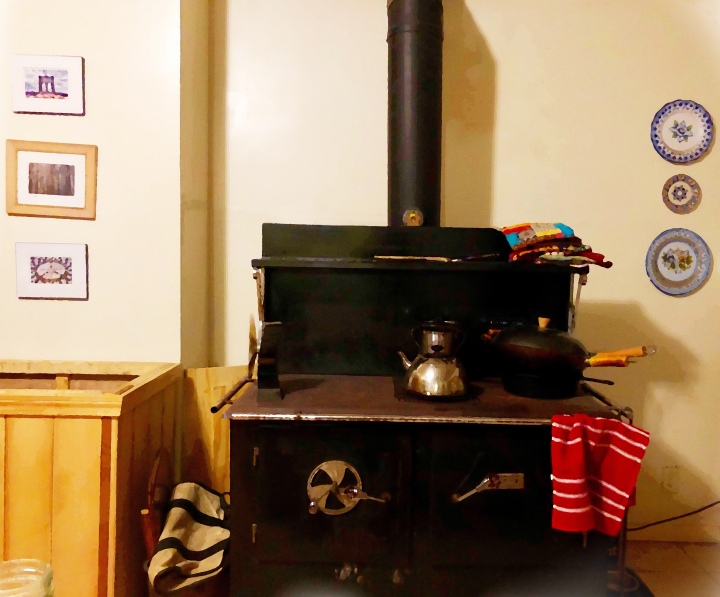 One of the things this last year has drilled into me, is the need to count your blessings every day, even if there isn’t a religious bone in your body. We’ve done a lot of it, so much it may have to be a book the future. This morning, however, a mundane little crisis reminded me that this little ritual it should be done even on the days you don’t think you need to.

There’s about 5 inches of sticky snow on the ground. The phone rang at 5 AM to announce a snow day, and Thing2 and I pulled the covers over our heads to go back to our winters naps. The Big Guy had to go to work, but most of the snow had yet to fall when he left this morning. By the time I got up to the news that we needed milk and cereal, our 900 foot sloping driveway had enough fresh snow to erase any tracks he had made only a couple hours earlier.

For the first 10 years we lived in this house, we were completely off the grid, watching every watt, hanging every second scrap of underwear on the line to save energy for ourselves and “do our part“. Most of those years my big environmental sin has been the use of a small SUV that rationalized because I work at home and don’t drive that much, but I’ve always felt guilty about it.

Last year, in a concession to our maturing bodies and increasingly busy schedule, the Big Guy and I tied our house back to the grid again. We still use the solar panels and solar hot water for most things (and our solar fridge and we’ll when the power goes like it did today), but our winter has been made easier with the use of an electric dryer. I compensated for my guilt by trading in my SUV for a car with much better fuel economy last year. Most of the winter it’s pretty good, but every so often, it struggles and even fails to get out of our driveway. I’ve been stuck twice.

Today was the third time. Even before i shoveled the path, I knew I should just wait for the Big Guy to bring milk and a few other things when he gets off work. Instead I ignored common sense and went out to scrape the car. The snow had fallen on cold steel and glass, and a few quick passes of the snow shovel got all of it off. The fact that there was enough snow to dig out my car with a shovel should’ve been one more warning to stay home, but I was determined not to let the physics of snow prevail.

I started the car and after the first 20 feet, knew I wasn’t getting enough turbo or traction to make it the 900 feet upwards, but I kept my foot on the gas. I almost made it, but when I got to familiar crest, my little car growled back at me and said, “that’s it!“

I was so close, and there was so far to back down. I knew I couldn’t stay where I was. The plow guy would be by later. The Big Guy would want to come down the driveway when he got off work. So I got back in the car.

I put the car in reverse. With one foot on the gas and the other switching between the clutch and the brake, I crawled backward, inch by inch, down the driveway. Previous attempts at this exercise have landed me in one of the ditches on either side of our driveway. I am not proud to admit that my 18-year-old son is much better this than I am, but as the backup cam switched on, I realized that my 18-year-old son has one thing that I lack—calm.

We are both patient when we need to be. We both have determination, but where mine is driven by energy and stubbornness, his is sustained by a seemingly bottomless well of calmness. I have seen it over this year, watching him respond to one bad diagnosis after another with a quiet acknowledgment that his only option is to keep going. As I looked at my tracks that would be my guide back to the parking circle in the back up cam, I knew the only way to stay in those tracks was to find some of that calm that I’ve seen and my son and his father.

Calm is not my nature. I paint landscapes with emotion and energy, but rarely with linear detail. The lines of a barn or, God forbid, a city, require too much calm, They don’t allow broad strokes and stabs of a brush. Those broad careless strokes have gotten me into trouble in life — they’ve been the bad choices that came with serious consequences — but on canvas they work for me, and I’ve been embracing them lately.

As I inched my way down the drive, however, I kept bursts of energy in check. I started to look, not over the dash at where I had been, but into the monitor at where I was going. About 200 feet down, I worried I was edging too close to the ditch where I had once been stuck but, instead of yanking the steering wheel the opposite direction, I took the time to get out and see where I really was. Then I got back in and looked at where I needed to go.

Five minutes later, I realized I was back in the parking circle. I put the car in first, and moved it onto a smaller hill so our plow guy can clear the area when the snow stops. I was empty-handed but strangely peace when I got back to the mudroom, stamping off snow as I hung up my coat.

I’ m making biscuits on the wood stove for Thing2 now, counting the blessing of being at home with my boys on a winter day made beautiful by a mundane little “crisis”.

Part of me looks at the driveway and thinks, “I should give it one more try. I should look for a different car for next winter.“ The new part of me, the one that has learned to count blessings, thinks about the things I learned in that driveway just a few minutes ago. I think about the things I realized about my son and the internal calm I didn’t know I could find.

One thought on “Calm in the Storm”