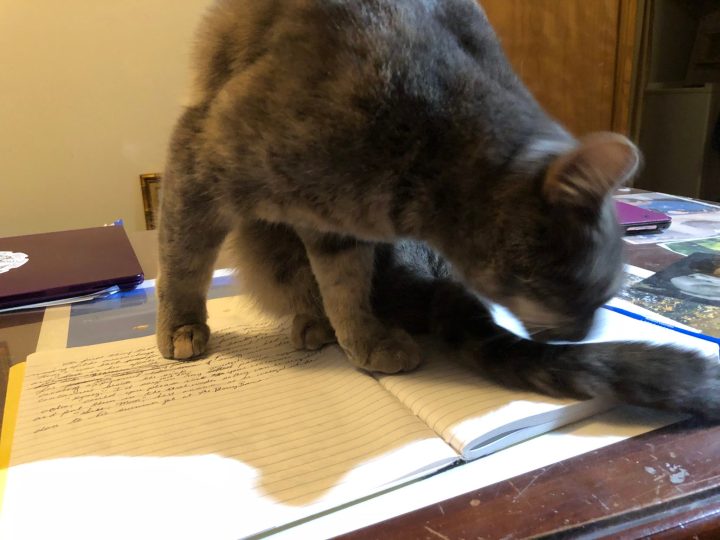 I rearranged the office situation to have more room to paint and write for school and for me. Monday night I sat down to break in the office with some prep exercises for NaNoWriMo (National Novel Writing Month) which starts on Friday. I have a few of my classes doing the young writers version of this project — it’s a great way to teach them the elements of fiction by reverse engineering and then creating it – –and I’m doing it in solidarity with them.

I’d been at the desk for a whopping five minutes, trying to come up with a character name for my mythology based cast member, when Lady Jane, our enigmatic gray girl hopped up on the edge of the desk and rolled over onto her back and my notebook.

Her brother, Jim-Bob, had a habit of climbing on my desk and into my arms when I worked at home. We developed a routine that let him sit across my arms without affecting my typing speed. I kept both of us warm and happy with my winter work.

But lady Jane is, or rather has been, much more aloof. She was an outdoor kitty when we adopted her, And although her brother was too, he instantly took to the joy of owning humans. Jane enjoys being petted and being near humans, But she never seem to want the responsibility of letting the humans in her sphere get too attached to her. We can be very demanding of cats, after all.

But, is her third indoor winter approaches, she seems to be having a change of heart. She has appeared on my bed night after night now. She follows me from room to room. And she hops on the desk demanding that attention you focused on her and not on something as inconsequential as a book.

It’s gotten me to wonder if any great authors with short literary resumes were simply kept busy scratching the bellies of felines in whose service they lived. I know that excuse won’t fly with my students, so Jane and I will need to work out a way for me to pet and write at the same time.