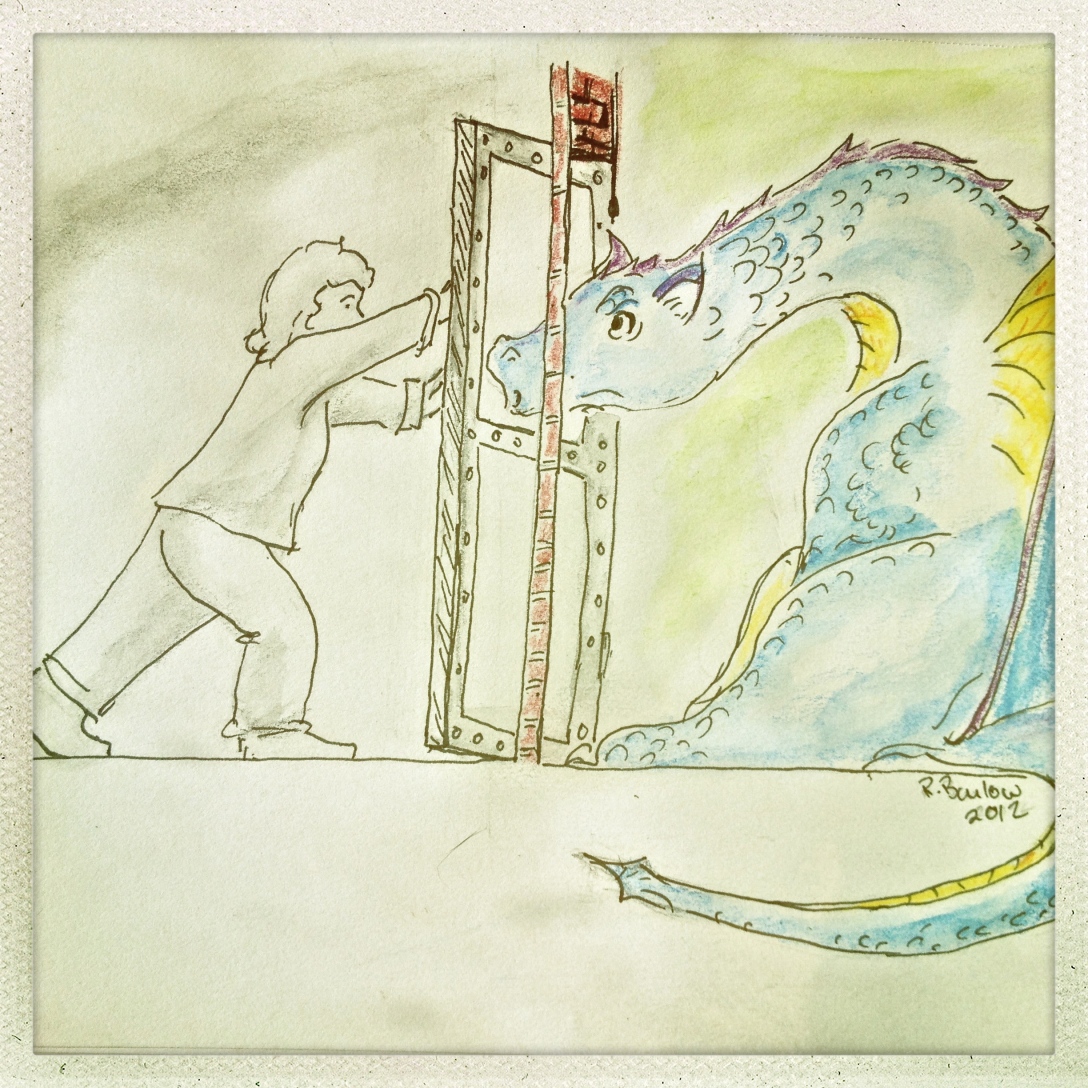 Over the last eight months, I’ve realized that the biggest hurdle to becoming a real writer is not finding an agent or a publisher but, rather, finding the courage to look at your own life honestly.

I’ve always thought there was a fine line between courage and crazy.  Mine is a secret door at the back of my brain.  This door leads from the part of my brain that lives in what you and I call the real world to an alternate universe.  If you were to step through the door to this world with me, you would find that it is also very real – bigger than life at times.  It is very much like the ‘real’ world. It has countries and languages, beauty and even danger.  It has problems.  But in this world, the problems are surmountable.  The humans are heroes, and, sometimes, I am one of them.  It is a world I have allowed not only to flourish but to take up a fair amount of real estate in my head.  I’ve been building and populating this universe since I could crawl.

I think this world has existed somewhere in my head since I was old enough to be aware of the physical world.  However, I began maintaining it in earnest soon after my parents moved from Baltimore to Ohio.  Already dealing with then-undiagnosed bipolar disorder (or what they then called manic depression, if it was discussed at all back then), I went from having giddy highs and intense lows that confused both me and my parents, to my first conscious flirtation with suicide when I was thirteen.

The move itself was a huge change.  My sister and I both lost our closest friends.  We went from a small school to a comparatively huge one.  The new city was not the cowtown we’d anticipated, and the kids were surprisingly fashion conscious – something years of uniforms had not prepared either of us for.  I tried, but I never acquired the art of dressing well enough to avoid merciless teasing.  Our old school had been incredibly diverse, but the new one was rigidly homogenous.

I was a typical eighth-grader and would have done (and, at first, tried) anything to fit in.  The first autumn leaves hadn’t hit the ground, however, before I realized it was not going to happen.  For the first time in my life, I heard people (kids) using racial slurs in ‘polite’ company.  The first time I heard it was in homeroom sitting next to a girl who would later become one of my closest friends.  A recent immigrant from Romania, unashamedly intelligent, and the only Jewish girl in a class of several hundred, she was a prime teasing target.  As the weeks wore on, the teasing took on a decidedly xenophobic tone.  I started to wonder if the teacher was deaf as she allowed the other students to make fun of this girl’s accent and clothes and her ‘Jewish’ nose.  Then, one horrible day after our entire class had been introduced to those black-and-white Holocaust movies, one of these boys turned to her and started softly singing, “Kill all the jewish people”.

I couldn’t believe that she didn’t cry.  I was already crying (a lot of us were), but, instead of finding the courage to stand up to these bullies on behalf of my friend, I began trying to find ways to avoid school altogether.  My parents had no way of knowing how bad the teasing was, and my sick-outs became more elaborate as Mom and Dad’s commitment to my education began to clash with my depression that was no longer a small, pulsating lump but a full-blown tumor.

At one point I even went so far as to swallow a half a bottle of Tylenol, in a half-assed attempt to ‘end it all’ – the first, but not last, conscious flirtation with suicide. My ignorance of toxicity didn’t kill me, but it made me vomit enough to keep me home from school for a few days.  My parents saw only the the vomit (it never occurred to me to tell them what had caused it), however, and, when my stomach recovered and my fake outs failed me, it was back to school and deeper into my own world in the cave at the back of my mind.

I made a few very close friends in the new school system, but I also lost a lot interest in being in a in-crowd that continually expressed its xenophobia so gleefully.  I (sometimes willingly) made myself a ripe target over the years, and my cave grew more elaborate and colorful.  At some point, I realized I needed a line of demarcation so no one would discover my fantasy world.

There is a big iron door there now.  Thanks to the intervention of an observant aunt, I ultimately came to terms with my bipolar brain, but I still go to the door more often than I should.  I have tried numerous pharmaceutical therapies for my bipolar, and they work for a time.  But they also have side effects, and I still have the nagging worry that the ‘balance’ they offer is as much an avoidance of my problems as is my door.  Now in my forties, perspective is my therapy, and, when I’m heading into and riding the highs that go with manic depression, it’s sufficient.  But when I’m sliding down the curve and the world begins to be tinged with shadows, I clear the cobwebs from the door and turn the key.

Lately, though, as I’ve been thinking about the writing life I want, I’ve had to take a hard look at the things I can control and the things in and around my life that I can’t.  Sometimes the things I can’t control terrify me, and, even as I write and want to write more, the place at the back of my brain calls out to me like a soothing siren.  For years, my world was an anesthetic when my dark side threatened to overwhelm me, but like any drug, it has side effects.  It is not a performance-enhancing drug, it is more like a mentally-induced coma.  When I’m under, I do manage to meet my day-to-day obligations, but I don’t create.  I don’t engage.  I don’t feel.  I let the ice start to close over my head, and the quiet and control are addicting.

My world is not my depression.  It is not the tumor, but it is just as dangerous.  Even during extended high periods, when cobwebs and briars have grown over the door, something has kept me from throwing away the key or paving over that real estate with something ‘normal’.  I’ve been retreating to it recently, and just yesterday began thinking about its origins.  I began thinking, again, about my friend who, apparently, never needed a door because she was brave.  And, when I sat down to write this morning, I wasn’t sure if confessing my crazy to the world was a brave thing or even a good idea.