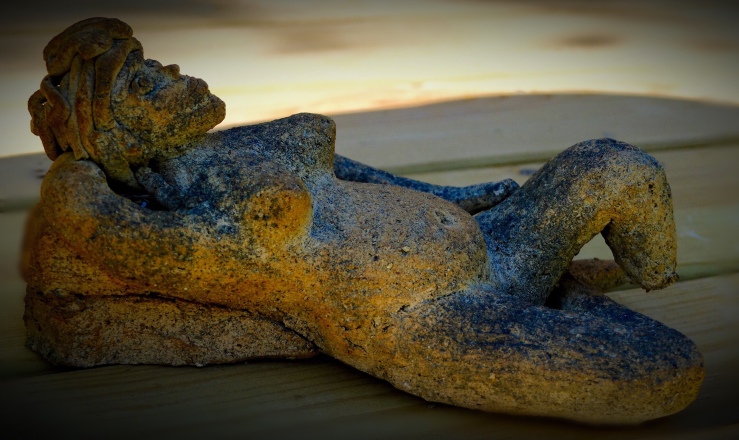 The paunchy gal here is a figurine brought to me years ago from Mexico by a friend. He must have seen a resemblance, but in all fairness, she’s actually a little less paunchy than I am. She’s taken up residence on our new deck. Before the deck, our weedy patio hid her exposed body, but I like that she’s now shamelessly sunning herself, embracing life and the world, not hiding in fear among the weeds, and definitely not worrying if society will disapprove of her brazenness.

Anyone who’s read this blog for more than a few months at a time, knows I have a penchant for redecorating. I change banners and colors. Sometimes it focuses more on painting and then on cartoons and back again to writing with pictures. So, you won’t be too surprised to read that I’m thinking about a new banner.

What may be surprising is that, unlike previous PickingMyBattles banners, this one may include my brazen friend and also may not have more than a tiny a tip of the hat to the bad parenting and even worse housekeeping that have driven so many posts over the years.

Thing1 was still nursing when he started toddling. He went through the crawling stage and the pulling-himself-up stages. Then he’d reach out for our hands and walks with us for guidance.

And then he didn’t reach out. He figured it out, and our help was no longer needed.

And then he didn’t need to nurse, and he took another step away.

And now he’s getting ready to take a giant step away. Thing2 is taking some of the same steps as he starts middle school and finds his own identity.

And I’m questioning mine.

‘Mom’ was, for a long time, the primary (and sometime only) way I identified myself, and I was happy about it. I didn’t like myself before Thing1 was born. Being his mom, meeting his needs changed my perceptions about boys, about the world and about myself.

But there was a person there before he was born. That person evolved, but she’s still there.

She’s still bi-polar as hell, still eating too much and the owner of a bleeding heart. She’s no longer afraid of hard work or committing to others. She’s a techie, an artist and a writer. And she’s demanding to be as much a part of my identity as the person my kids know just as ‘Mom’.

There is no such thing as ‘just a mom.’ That phrase strips motherhood of the depth of its responsibility and meaning as thoroughly as it reduces women to one of the other popular one-dimensional labels of angels or whores. I’m a bit of all of them and more.

There are still battles to be fought on behalf of Thing1 and Thing2. Thing1’s hair trigger colon still threatens his independence while Thing2’s creativity combined with his pack-rat sensibility could give new meaning to Vermont’s image as ‘the Green Mountain state’ with more of a green glow. I’m grateful to be the one fighting along side them. They’ve helped me see how much stories about family do matter as much as – maybe even more than – the stories about politicians and generals. I will always write those because they are the stories about people coming together, they are ultimately stories about hope.

But there are otherbattles, my battles, to fight as well – battles for creativity and a life of contribution and meaning beyond the laundry pile. They are just as important, and all of those battles can only be won by embracing every aspect of my identity – the loving mom, the bleeding-heart angel and even what the world may see as the bi-polar whore.

They are what combine to make what any seasoned veteran truly is — a fighter.

1 thought on “A Secretly Real Identity”