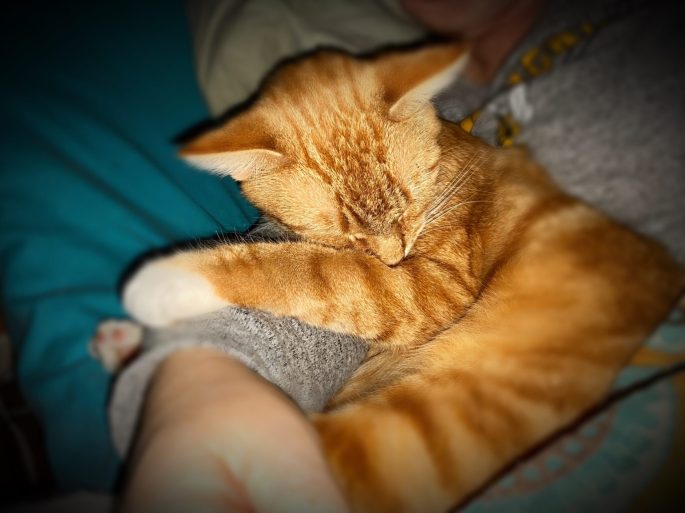 We got back from the hospital in the early afternoon. All three of my boys helped me into the house where a borrowed motorized scooter was waiting. I scootered straight to bed where valentines flowers and chocolate were waiting and, after a quick bite, passed out for the rest of the evening.

Jim-Bob, our orange tabby, was initially quite displeased by the new arrangement. He did not like presence of the wheelchair or the extra glasses and pill bottles on the bedside table where he likes to climb before he hops onto the bed and curls up in my arms. He woke me up a few times in the early evening with the sounds of a glass or a book being shoved unceremoniously off the table onto the floor. He still wouldn’t come onto the bed — my cast appear to spook him.

About midnight I woke up as the first round of painkillers wore off to note that he had overcome his dislike of the wheelchair where he was now sleeping and, apparently, watching over me. I moved him as gently as possible onto the bed so I could use said wheelchair to get to the bathroom and back. As soon as I was in bed again, he hopped back onto the wheelchair. This time, after an ibuprofen, I gently pulled him back onto the bed for a little snuggle that turned into an official Jim-Bob curl-up and sleep-over, and, as his purring reverberated into my arm, the pain seemed to disappear.

It could have been the miracle of modern medicine, but at least some of my money is on the pain killing effects of orange tabby therapy.