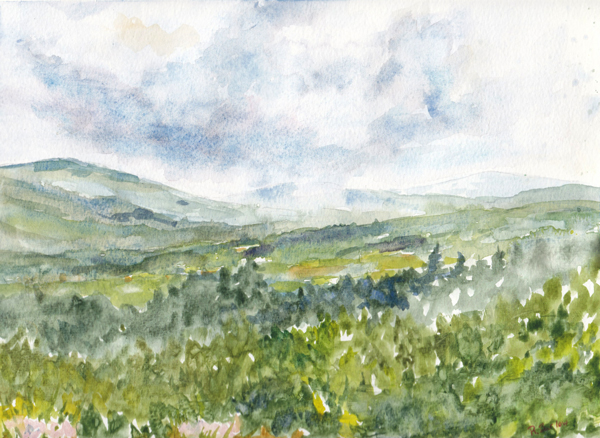 Wanting to protect him in his formative years, I’ve never written Thing1’s name on this blog. On the occasion of his 17th birthday last week, however, Thing1 went on a walk-about up the back of Mount Equinox, the highest peak of the Taconics. It was from the top of the Equinox, about 4PM, that he sent me the photo that inspired this painting.

Mac – short for MacLean is as independent-minded as you’d think someone with a name like his might be, but he’s also something I’ve never been.

He’s brave. Not fearless – but brave.

On the way up the mountain, he texted a few photos and the occasional weather report –  ‘a storm is passing and it’s so cool – don’t worry, Mom’.  His phone ran out of battery before he could text about the bear that crossed his path on the way down the mountain, but neither a lack of communications or a close encounter of the furry kind sent him scurrying to our doorstep.  The only thing that brought him off the mountain seemed to be the acknowledgement that, as it got darker out, his mother would be doing what mothers do best – worrying.

When he got back, he showed us the pictures he’d taken and told us of everything he’d seen — the abandoned farm, the gates of the monastery that sits midway up the mountain and the animals that had crossed his path.  He ended his story with plans for a next hike and an invitation to join him on a future adventure, and I realized we’d received the best possible birthday present from Mac on his 17th birthday.

We heard a kid who could acknowledge the reality of unexpected dangers on a hike while refusing to let fear keep him from the path.  And I knew his invitation wasn’t a cry for help but an encouragement to join him on a new adventure.